Back to school theatre: From the classroom to the stage

This season we’ve put together a hit list of brilliant theatre shows that will bring your GSCE, A-level and university texts to breath-taking, side-splitting, heart-breaking and mind-boggling life.

Language, movement and stories are best when they’re heard and seen – The Lowry’s autumn season boasts 10 great works that you’re likely to find on your academic reading list; on stage, off the page, and out of the classroom.

London’s Royal Court Theatre bring their rare production of a trio of short plays from one of the fathers of literary Modernism.

Samuel Beckett, a Nobel prize winning author, was one of the seminal writers of the 20th century and is studied by literature and performance students at A-level and above.

Beckett’s work is famously challenging and to watch Not I, Footfalls and Rockabye performed (a rare enough treat) provides an invaluable insight into how Beckett intended these pieces to look, feel and sound.

Based on the story of Helen of Troy in Homer’s Iliad. This ancient story from Classical Greece has captured imaginations for millennia and – as one of the earliest examples of European literature – has been translated and taught all over the world for centuries.

Actors of Dionysus are renowned for fresh new interprations of Ancient Greek dramas. A contemporary revision of the epic tale, featuring elements of aerial circus, Helen tells the story of the mythical beauty of Troy in her own voice.

Rambert, whose work is now on the A-level dance syllabus, brings the rock’n’roll swagger of the Rolling Stones thrillingly to life in Rooster, Christopher Bruce’s electrifying celebration of the swinging sixties.

Sharp-suited, snake-hipped men and strong, sassy women perform virtuoso courtship dances to some of the Stones’ most famous tunes, including Not Fade Away, Paint It Black, Sympathy for the Devil and Little Red Rooster.

Rambert will also host an Insight Matinee on Friday 3 October at 1.30pm, enabling students to gain a greater understanding of the work of the Company. Ideal for schools, the matinee is a reduced programme containing Mark Baldwin’s The Strange Charm of Mother Nature and Christopher Bruce’s iconic Rooster.

Mark Baldwin and Christopher Bruce will introduce their pieces, giving an overview of the inspirations behind the work as well as giving an insight into their creation.

The Company dancers will also demonstrate a short section of class, led by one of the Rehearsal Directors. Here they will demonstrate the similarities and differences between classical ballet and contemporary techniques and give the audience a chance to see the dancers in a more informal setting.

Not About Heroes is a moving drama about the life and war poetry of Britain’s most famous war poets: Seigfried Sassoon and Wilfred Owen.

During the First World War, two of England’s greatest twentieth century war poets met at Craiglockhart War Hospital. Weaving their great poetry, letters, and autobiographical writings this emotionally powerful and often witty play tells the moving story of the friendship that transformed them both.

If you’ve seen ‘Regeneration’ one too many times, this may be the perfect way to discover or re-discover two of the greatest poets of the 20th century.

The Bard! The Father of the English language! The Granddaddy of English literature…. Shakespeare’s raucus story-telling mastery plus a bit of English history (give or take a few facts) thrown in.

The Royal Shakespeare Company return to Salford with the irrepressible Anthony Sher starring as Falstaff, in the tale of King Henry IV (Henry of Bolingbrooke, 1367-1413), his wayward son Prince Harry and the ageing rake Falstaff.

Though we admit the The Hollow Crown – the BBC’s 2012 adapatations of Shakespeare’s history plays – are very good, there’s really nothing quite like seeing it live, and Sher’s performance is electric. But don’t take our word for it, read the reviews.

The RSC will host a preshow on-stage session for schools on Thu 23 October. The insight event will explore how Henry IV has been brought to life on stage and the range of interpretive choices available to the director and actors. Students will help guide the session from the stalls and there is an opportunity at the end for a Q&A with the actors.

The Company are also offering workshops led by RSC Assistant Director Owen Horsley. These workshops will explore the creative choices behind the productions using exercises from the company’s rehearsal process. Students will gain a deeper insight into the play and performance possibilities. The sessions can either be pre-show for schools who are yet to see the show, or as follow-ups.

A Farewell To Arms is a modern classic and this UK stage première is an extraordinary version of Hemingway’s powerful meditation on love and the brutality of modern warfare.

Imitating The Dog are also running a residency at Contact from Mon 10 – Wed 12 November (2-7pm). Working with the company, students will create a screen-based work (showcased at both Contact and The Lowry) as a companion piece to A Farewell to Arms, exploring the narratives of war, everyday conflict and love.

Frantic Assembly return to The Lowry with a new take on Shakespeare’s thriller-tragedy of paranoia, jealousy, sex and murder. Fusing a taut adaptation of the classic text with its trademark hard-hitting choreography, Frantic Assembly takes a scalpel to 21st century Britain, exposing prejudice, danger and fear.

Frantic Assembly will be offering Othello Uncovered workshops in schools, enabling students to discover the devices and techniques used to create Othello and provide the opportunity to create original material following the processes used by the company.

George Buchner’s unfinished gothic masterpiece is now studied at A-level at schools and colleges across the country.

Splendid Productions bring their unique style of ‘indoor street theatre’ to Salford with this stripped-back, highly theatrical telling Buchner’s classic. With nothing but a trunk-full of junk, three talented performers piece together a fractured story in a fast-paced mix of comedy, tragedy, puppetry, and song. A romping comedy of 18th century class and manners… or lack of them! This classic play from Oliver Goldsmith is a mainstay of English and American theatre history and is one of the few plays of it’s time still regularly performed. Come prepared for merriment, warmth, wit and wigs. Very big wigs!

Mark Haddon’s multi-award winning novel has been praised for it’s sensitive and enlightening portayal of a young man with an Autism Spectrum Condition as he explores and tries to understand his universe. It is now being studied in schools for it’s bold concept and unusual literary style, in which the reader is shown the story through Christopher’s eyes.

The National Theatre’s stage adaptaion opened in London in 2012, and will open it’s first UK tour here at The Lowry in December.

#Love Lowry – A letter of hope to a stranger 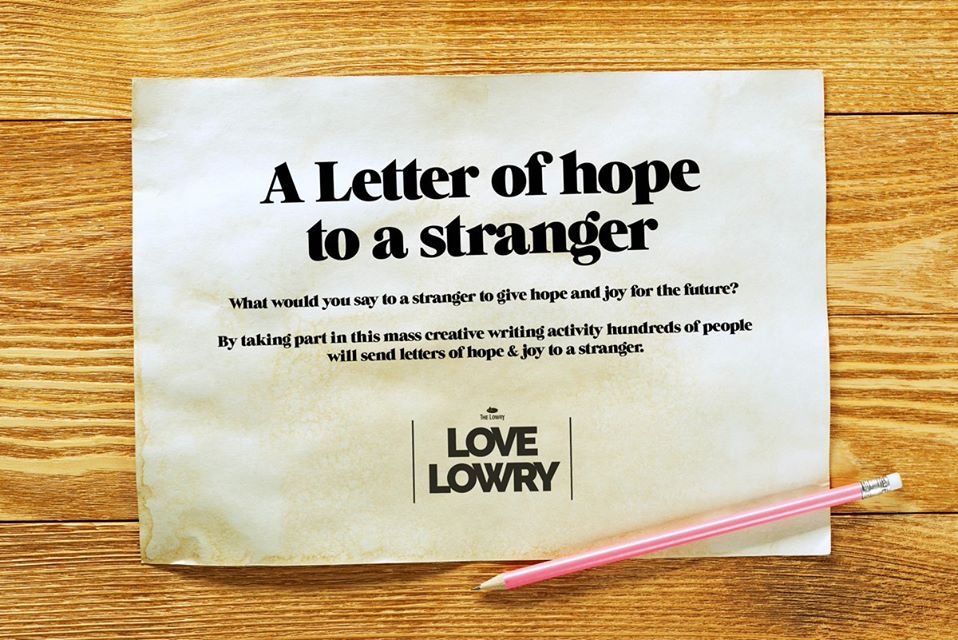